The White Fleets: from Sunward to AidaAura

The success which today’s large mega cruise ships enjoy is built upon the one generated by their smaller predecessors. Two operators in particular spring to mind when it comes to leaping from “small“ to “large“ and even “giant“ in terms of vessel size: Norwegian Cruise Line and Aida Cruises. And indeed their small ship pioneers share a number of remarkable similarities.

When in the early 1970s, Royal Caribbean had only begun building cruise ships and Carnival was just about to purchase what would become their first vessel, the Mardi Gras, NCL (then still „Norwegian Caribbean Lines“) already was in full swing with a whole fleet of ships. Dubbed the „White Fleet“, they were pioneering 3-, 4- and 7-day itineraries in the Caribbean long before serious competitors would arrive. Measuring less than 20,000 GT and carrying some 750 passengers, they were regarded as the perfect size for their purpose. 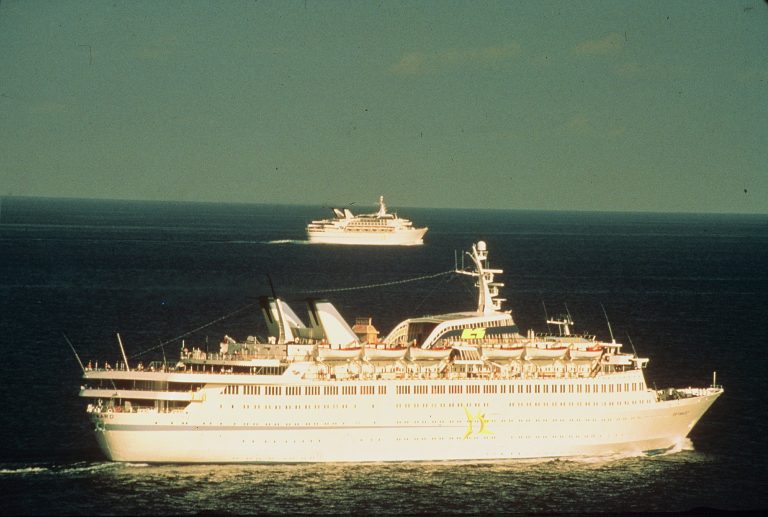 Anything smaller wouldn’t generate the profits required and anything larger would not only face problems sailing fully booked year-round, but also finding berths in some of the smaller Caribbean islands. NCL’s White Fleet consisted of four ships – the Starward (built in 1968), Skyward (built in 1969), Southward (built in 1971) and two incarnations carrying the name Sunward, the original Sunward from 1966 and the Sunward II from 1977. At a time when the travelling public only had the choice between converted and often run-down former passenger liners and some luxury ships only few could afford, NCL’s White Fleet invented the concept of „informal luxury“ – contemporary cruising in modern surroundings at affordable rates. 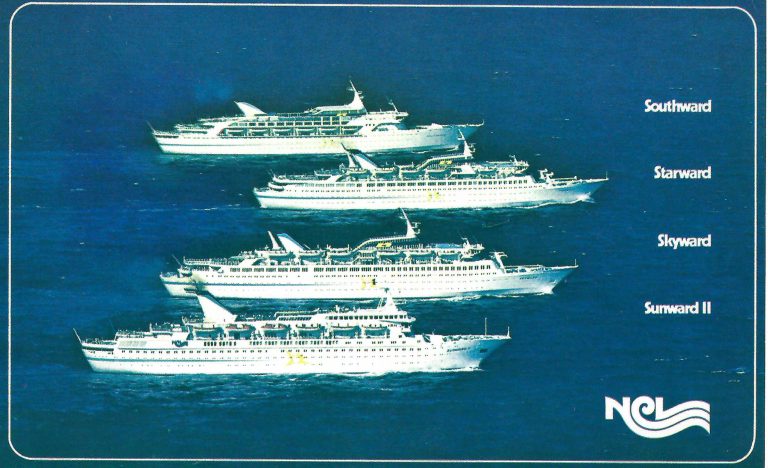 The White Fleet could easily have been made redundant once NCL had put in service their first mega cruise ship Norway in 1980 and opened its first private island Great Stirrup Cay which paved the way for the concept of the ship as a destination in itself. But not so. In fact, Starward and Co. stayed with NCL for an average 22 years, not only continuing to sail for NCL when the ships were literally dwarfed by newcomers like the Sovereign of the Seas (1987) or the Fantasy (1990), but also charting new waters. The Southward for instance was moved to the US West Coast in 1987, thus expanding NCL’s scope and even leading to the change of company name from Norwegian Caribbean Lines to Norwegian Cruise Line.

Not least due to their immense popularity, the White Fleet was retained even after NCL put in service the Seaward in 1988. The first two ships (Sunward II and Skyward) only left for new owners in 1991, while the Southward and Starward continued to sail for NCL until 1995, the latter having stayed with the company for a remarkable 27 years. Furthermore, it must be said that all four ships enjoyed a long life after NCL as well. The Southward and Sunward II were not broken up before 2013, while the Starward was scrapped only in 2018 and the Skyward even made it into her sixth decade, sailing until the present day. 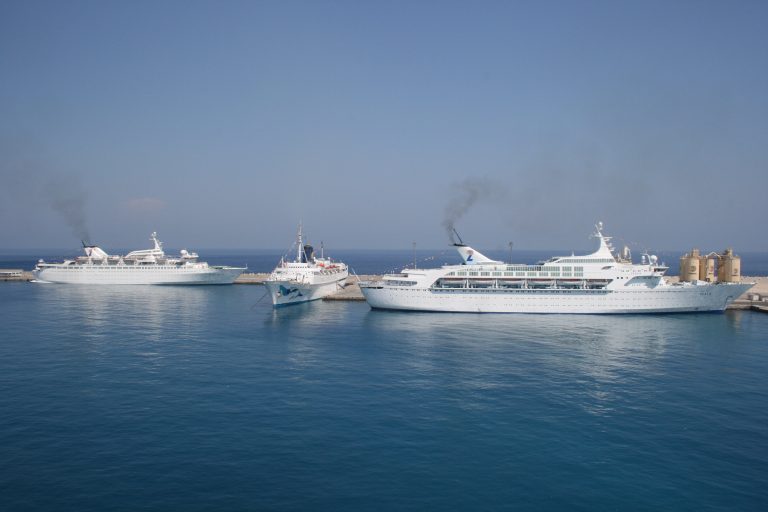 While I haven’t sailed on these ships while under NCL ownership, I had the pleasure of sampling three of them during later stages of the careers. My memories of Mediterranean cruises onboard the Perla (ex Southward), Coral (ex Sunward II) and Aegean Queen (ex Starward) rank among the finest I have of international cruising at all. These ships truly were the perfect size – especially for itineraries like the Caribbean and the Mediterranean, but also to enjoy a familiar onboard atmosphere not to be found on today’s large resort ships.

When in 1995, the last of the White Fleet left NCL for good, a German shipping company embarked on the same task that Norwegian Caribbean Lines had pursued 25 years earlier: cracking up a cruise market that until then had been dominated by concepts that now were no longer deemed up-to-date. In Germany during the mid-1990s, one only had the choice between elderly ex-Soviet or other converted car ferries and liners on the one hand and the likes of Hapag-Lloyd’s or Deilmann’s five star cruise ships on the other. 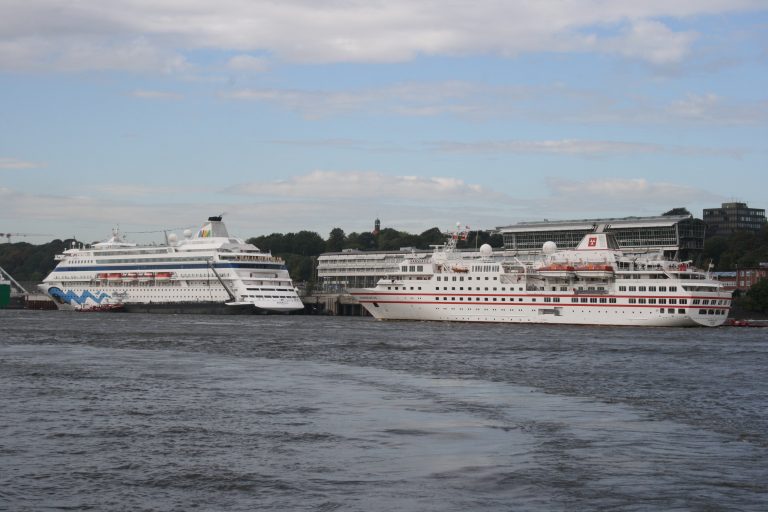 Aida Cruises, then named Arkona Reisen and itself a subsidiary of the shipping company DSR, went on to build the “club ship” Aida – the kind of informal, yet contemporary cruise vessel NCL had invented with the White Fleet. The only difference was its focus on the German-speaking market and a restaurant concept built around buffet rather than a la carte options. After a somewhat bumpy start between 1996 and 1999, Aida succeeded and had the AidaVita and AidaAura built in 2002 and 2003. Aida now had its own white fleet of ships the perfect size for the 1990s and beyond: vessels of 40,000 GT size carrying no more than 1,500 passengers.

Of course, the perfect cruise ship now was twice as big as the original Starward and could accommodate twice as many passengers, but Aida’s white fleet shared a number of similarities with their NCL counterparts. They were no high-end products, rather targeting the mass market; they were small enough to call at ports the ever-increasing number of mega cruise ships could not; and they were highly popular once Aida Cruises had achieved its goal of establishing itself as the new strong force on the German cruise market.

Soon enough however, history was repeating and like in the NCL case, the three original Aida ships had to step back into places in the second row once Aida built a new breed of ships, the seven 70,000 GT vessels of the AidaDiva “Sphinx” class (2007 – 2013). But these new ships did not mean the end for AidaCara (the original Aida), AidaVita and AidaAura. 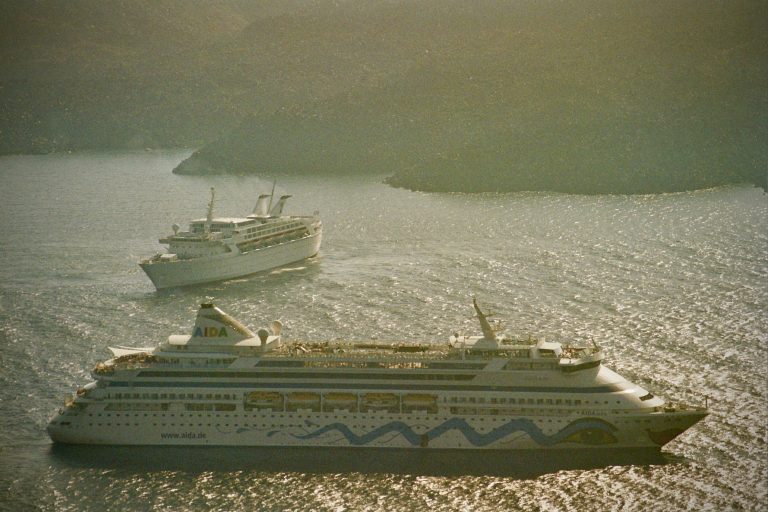 Aida Cruises, now part of the Carnival Corporation, even built the giant AidaPrima and AidaPerla (2016/2017) without giving the AidaCara (now 20 years old) away. Instead, Aida did what NCL had done when the Southward became surplus to requirements in the Caribbean: The three small ships were selected to test out new markets, going on longer, even world cruises, sailing up to the North Cape in wintertime or sailing in the shadow of the giants, albeit to smaller, lesser-known ports. The latter routes were being marketed as “Aida Selection” cruises with the operator requiring a premium surcharge on its more intimate ships.

Nevertheless, they are now the same age as NCL’s White Fleet vessels had been in the early 1990s, so the question is up if and how long they will continue to sail for Aida Cruises. The latter has not only taken delivery of another giant, the AidaNova in 2019, but will receive the next one, the AidaCosma, later this year. Both can carry more than 6,000 passengers which is a far cry from what was regarded the perfect size in the 1990s. Needless to say, Aida Cruises has long dropped its “club ship” claim. Their latest ships more resemble a floating city than a club-like ship where passengers and crew alike know and greet each other after a couple of hours onboard (as experienced by the author onboard the AidaAura).

But interestingly, while Carnival has been all but reluctant to sell off older and less profitable ships for scrap once the Corona pandemic hit the world’s largest cruise corporation in 2020, Aida Cruises so far was exempted from retiring even a single ship. Of course, the market for second-hand cruise vessels is weak at a time when most people aren’t allowed to travel abroad anyway. And the fact that self-service buffets surely are not the way forward when it comes to helping avoid spread the a potentially letal virus might not be a big re-selling point either. 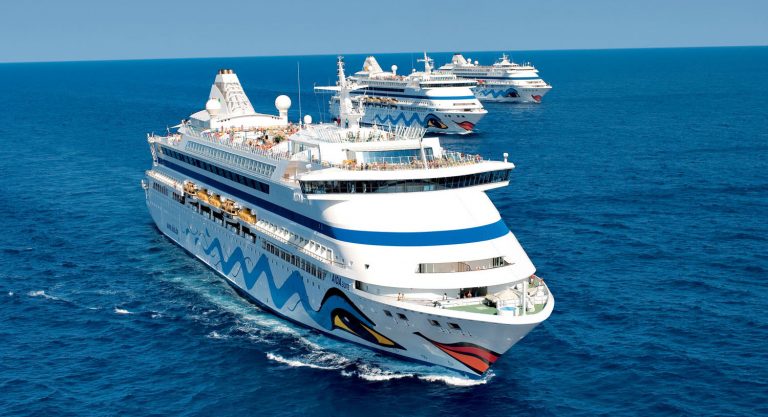 But as we have seen in the Starward/Skyward case, 25 years for some ships is an age their second life only just begins. Maybe history is repeating also with regard to private islands that form a safe “bubble” for the large ships, allowing the smaller ones to continue the tradition of destination-intensive cruising? If these can be operated profitably, it will be great to see AidaCara, AidaVita and AidaAura approaching their 50th anniversary in the mid 2040s just like the Aegean Queen (ex Starward) did in 2017. And if not within the Carnival sphere, perhaps elsewhere? Once more, it would be testimony to a far-sighted ship design of times gone by. Long live the White Fleets! 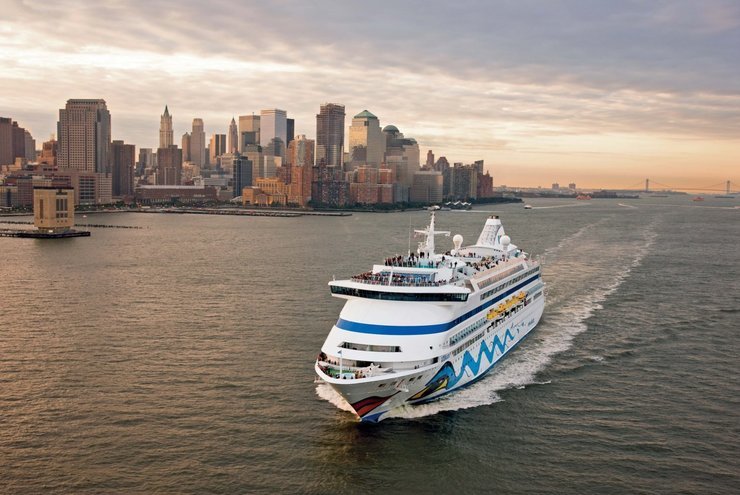