Star Clipper: a 4-masted Schooner as a cruise ship

To tell the truth, I hardly knew what to expect when I was invited to sail the coast of Costa Rica, that magical Central American country north of Panama and south of Nicaragua.  The ship I would board in Puntarenas, the country’s major Pacific coastal port, was Star Clipper.

It is one of three Sailing Ships Star Clippers operates in sunny climes all over the world. Star Clipper would be quite unlike any ship I had sailed on in the over 30 cruises I have taken.  The white-hulled beauty is a sleek “Clipper Ship”, a breed of ship that plied the seven seas before steam or coal or combustible engines forever changed ocean travel. 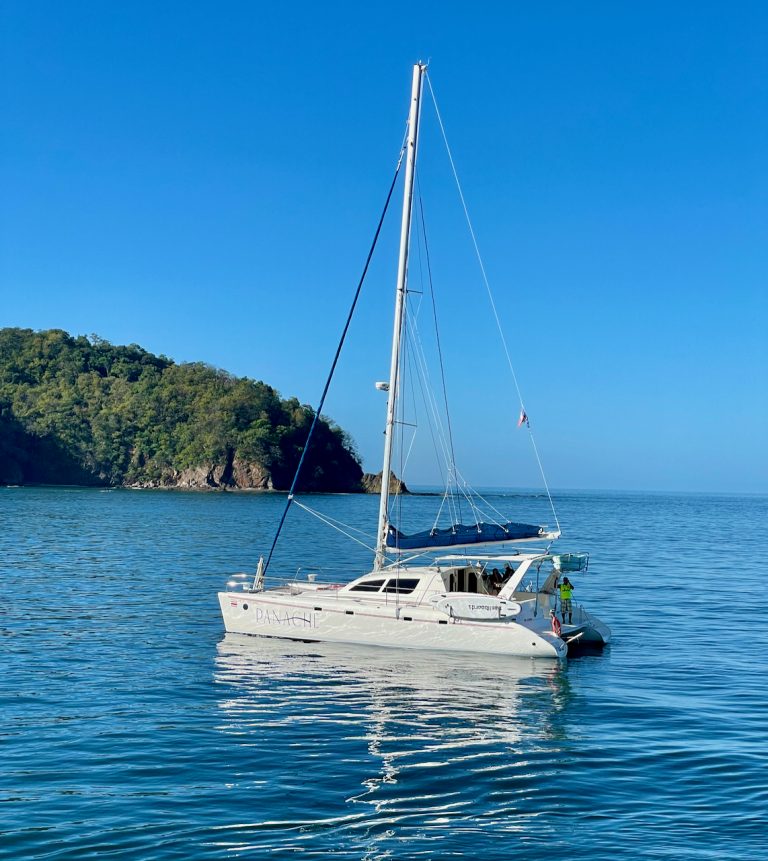 The childhood dream of a Swedish yachtsman named Mikael Krafft, Star Clippers now numbers three ships. In addition to Star Clipper, her twin sister is called Star Flyer and the flagship of the fleet is Royal Clipper is the largest of all three.  I am a devotee of today’s beautiful cruise ships, magnificent vessels that carry passengers all over the world in luxury and style.

What, I wondered, would it be like to sail with the wind as our propeller?  How would I adjust to the smallest ship I’ve ever sailed on?  Would I be able to fit my wardrobe and myself into a cabin of just 118 square feet (11 square meters)?  What would it be like to share a ship with a truly international crowd of German, French, Belgian and Americans, a crew made up of a Polish Captain, German and Spanish officers and Indian sailors and a service staff almost all of whom are Southeast Asians?  It turned out that on all counts, I loved every minute. 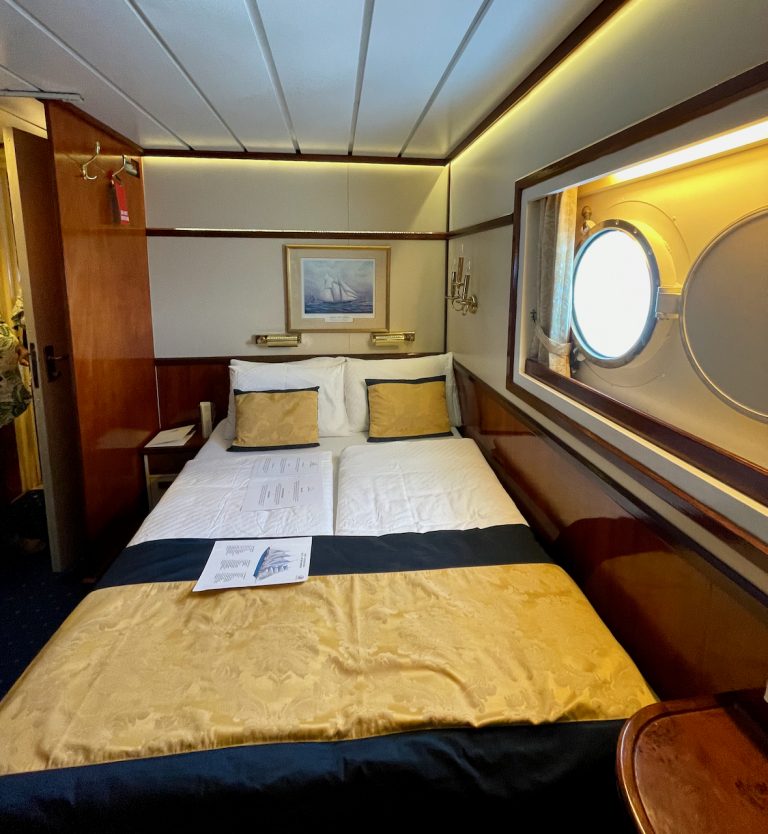 FIRST, THERE’S THE VESSEL ITSELF

At 379 feet long, with a beam of 49 feet and carrying just 166 guests and 74 crew, Star Clipper is likely the closest I will ever get to sailing in an enormous private yacht.  There’s no mistaking Star Clipper for anything other than the most nautical of experiences. The teak decks, the brass fittings, the mahogany woodwork bear all the marks of their glorious forbearers. The interiors are a reminder of that golden age.

Any doubts I had about my cabin were quickly erased. Despite its small size, everything hhd its place and there truly was a place for everything. On Commodore deck, the lowest of four, #110 had plenty of closet space, a small flatscreen TV with a DVR for in-cabin movies and safety drills, a hair dryer, a radio, a telephone and a safe. There were great reading lamps by the bed, and a brass-fitted porthole with a view so close to the ocean, it often splashed right over the glass. The bathroom was a model of functionality with more toiletries than one person could ever use. Cabin service was superb. “Sonny”, my Filipino steward, worked like a flash and made up the room the moment I left it. Turndown service and an after-dinner chocolate came right at the Cocktail Hour. 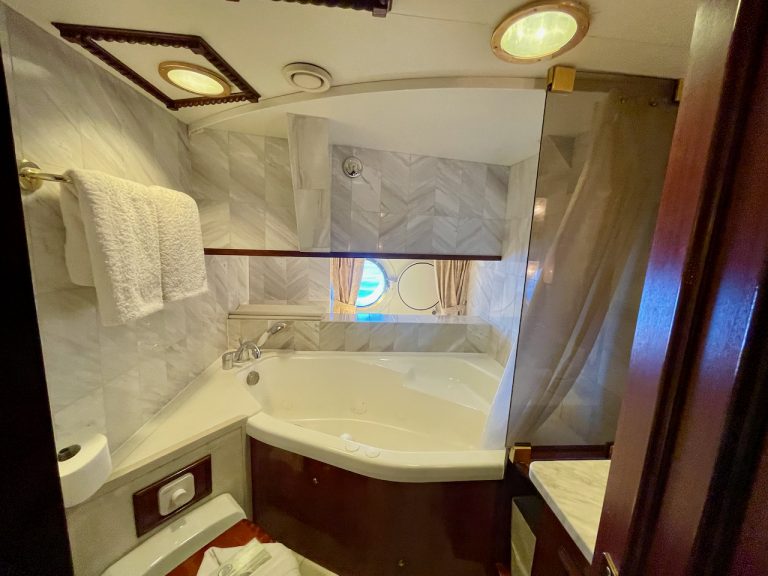 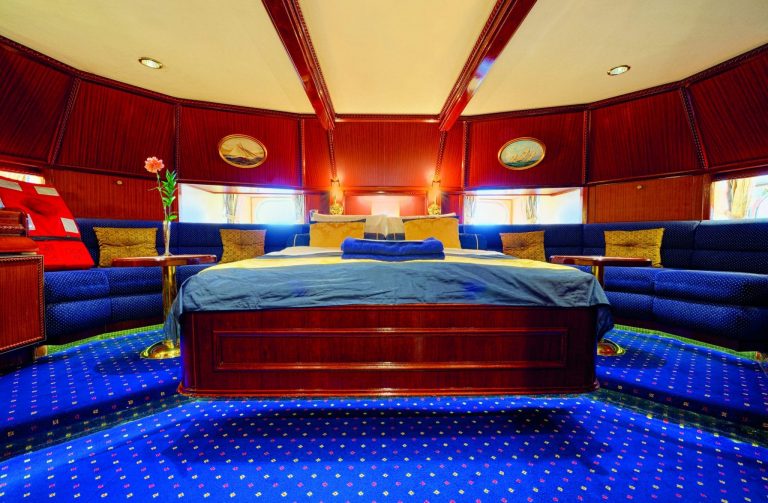 ON STAR CLIPPER, THEY MEAN WHAT THEY SAY ABOUT “SETTING SAIL”

Star Clipper is built to be powered by the prevailing winds.  But there is a back-up motor that runs on pure low-sulphur gas, so environmentally friendly, it was given an award: The International Air Pollution Prevention Certificate.  And there’s a generator that provides all modern conveniences like air conditioning—a must in the warm weather climates Star Clipper calls home. The 16 sails are simply magnificent, and the crew goes to great effort to raise and lower them, to light them at night and to unfurl them whenever the wind blows. On our sailing we didn’t encounter many breezy days. This may have been a blessing as there are no stabilizers to steady the ride in rougher seas.  Smooth sailing aside, there’s no mistaking Star Clipper for anything other than a sailing ship. Star Clipper isn’t for the less agile. There are plenty of stairs to climb and ropes to step over.  Several ports feature ‘wet landings’ where you disembark down a long stairway, into a tender and then “splash land “ into a couple of feet of water. 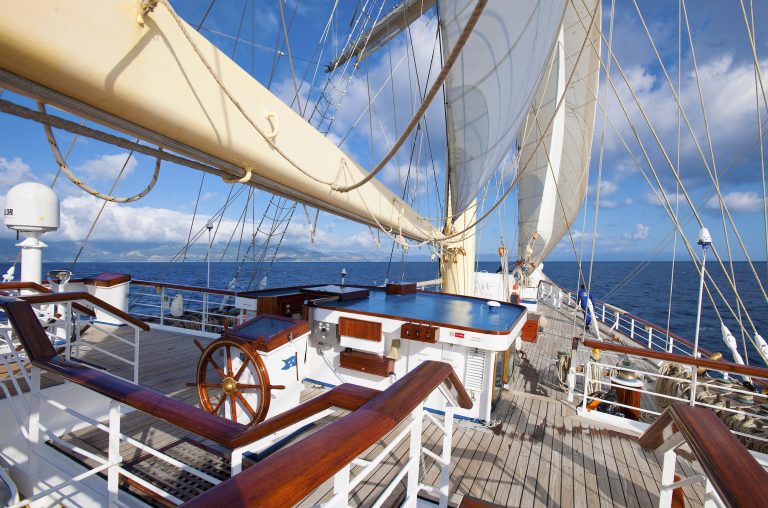 THE STAR CLIPPER EXPERIENCE IS REALLY ABOUT FUN!

It takes very little time to realize Star Clipper is all about making passengers happy. And it succeeds. Well over half the guests were past passengers. The Star Clipper experience is all about having a great time. During the day, Star Clipper concentrates on sun and fun. There’s an eager young Sports Staff that presides over activities ranging from morning exercises to all manner of water toys—kayaks, waterboards, diving and snorkeling equipment.  Stops at deserted bays and beaches are a highlight of the Costa Rican itinerary.  Meanwhile back on board, you can don a safety harness and climb the ropes up to the Crow’s Nest.  You can lounge on the bowsprit.  Or you can sit around one of two refreshing pools in full sun or under shade. 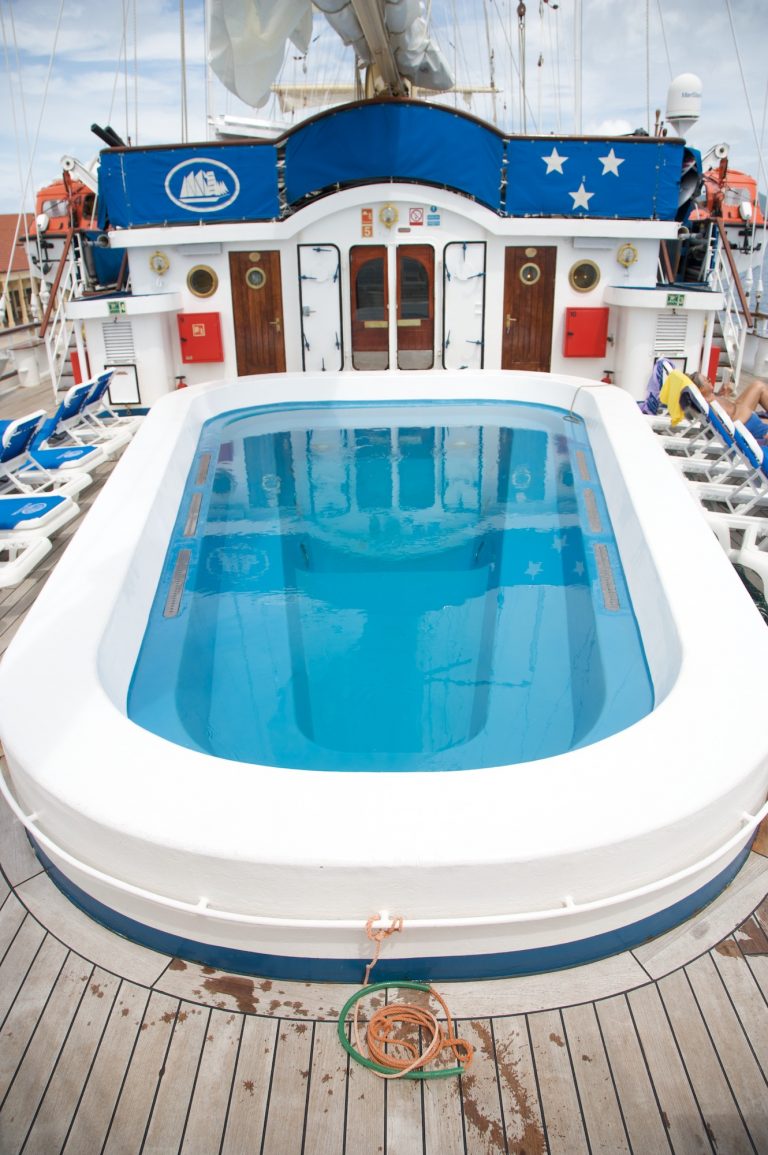 You’ll never be puckish because you can eat 6 times a day. “Meal occasions” range from Early Riser Breakfast, to an ever- changing international Breakfast Buffet, a ‘themed’ Buffet at lunch, cocktail hour offerings by the outdoor Paradise Bar. Finally dinner is served course by course in a lovely dining room that serves all guests at a single seating. Late night nibbles? You’ll never go hungry aboard Star Clipper. 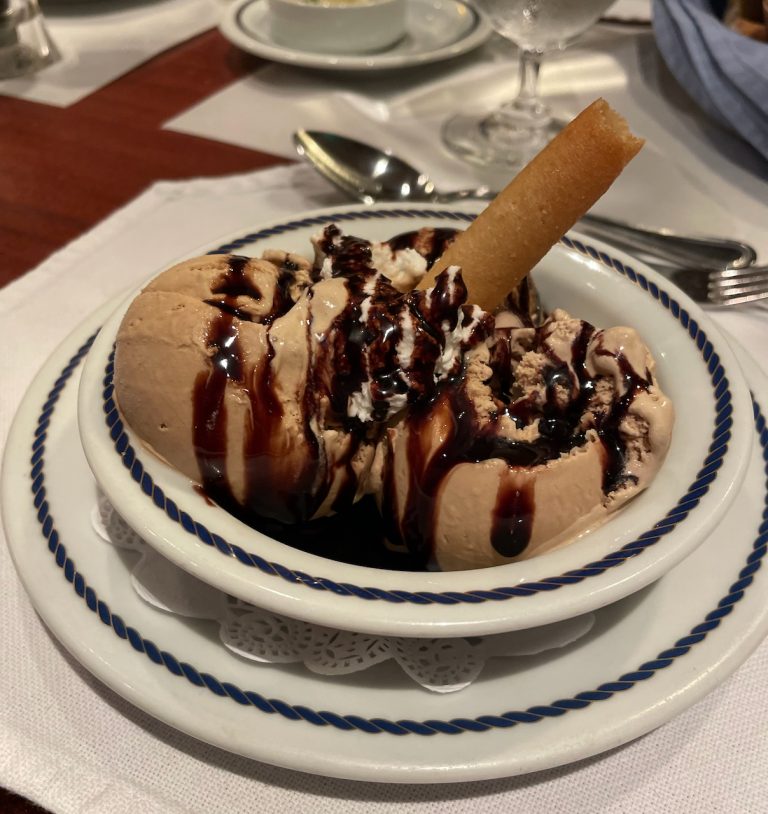 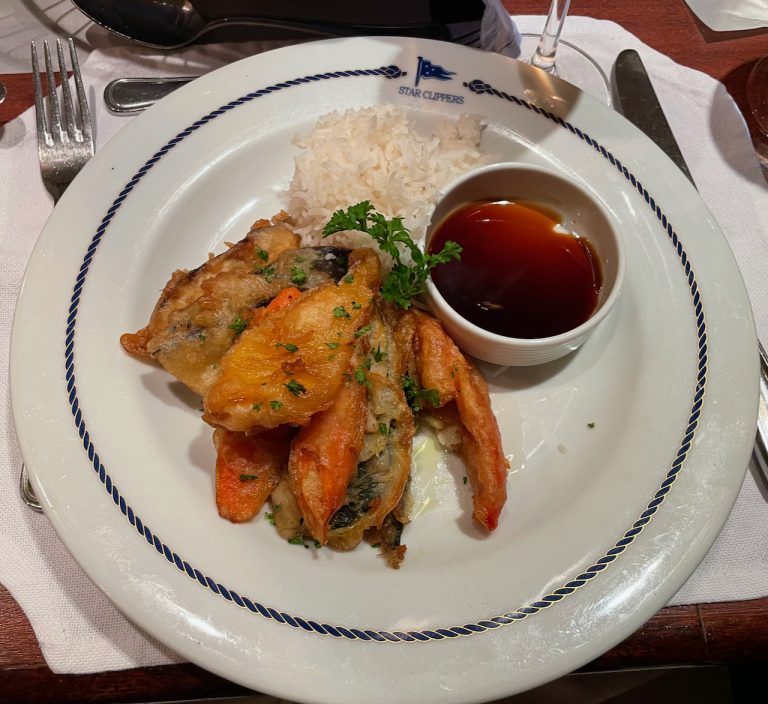 Early evening finds the increasingly friendly crowd gathered on deck for magnificent sunsets and entertainment at the Paradise Bar. After dinner, you can head to the deck for simply incredible star gazing or cut the rug on deck at Pirate’s Night and the unmissable Crew Talent Show, audience participation not only encouraged but insisted upon. 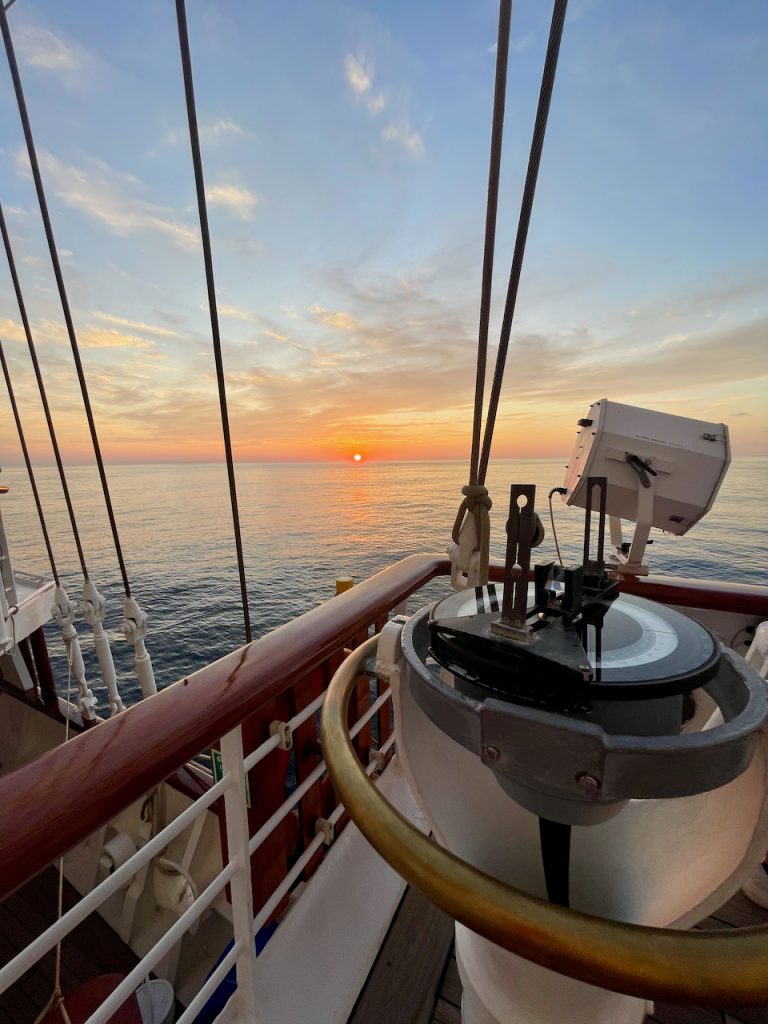 Nearly half a million species of animals populate Costa Rica’s lush tropical forests. That makes Costa Rica one of the most bio-diverse countries on earth.  As Star Clipper sailed the coast of the country from one end to the other, we had amazing opportunities to view the plant and animal life up close.  Dropping anchor close to Manuel Antonio National Park, recognized as the jewel of Costa Rica’s National parks, the shore excursion almost guaranteed wildlife and tropical bird sightings. It did not disappoint. 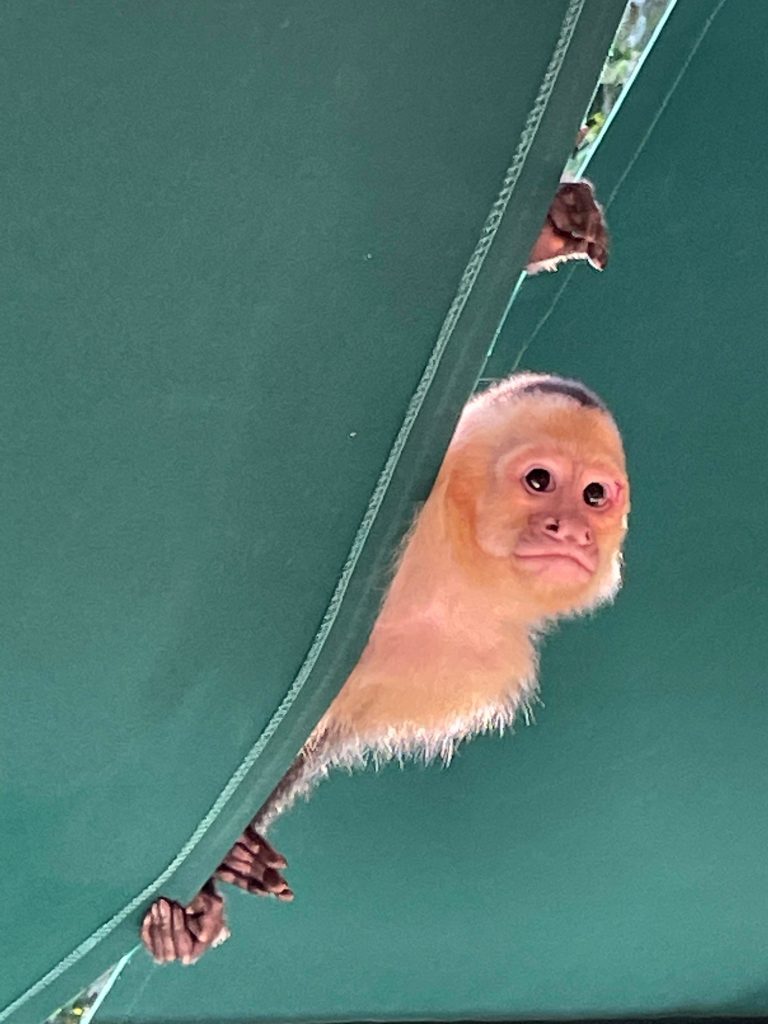 Further shore excursions on our voyage included kayaking through mangrove forests, canopy forest tours, unspoiled coves and beaches reached by catamaran where snorkeling, swimming and sunbathing awaited. And along the way we were greet with the expression “Pura Vida” by the great people of Costa Rica, the national motto of this very special country.  Other sailings dip into Panama and its natural treasures. 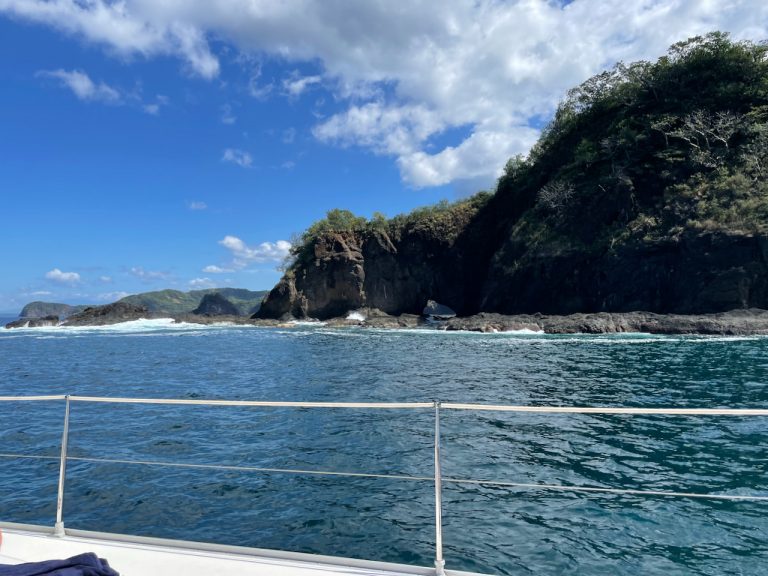 GETTING TO COSTA RICA IS EASIER THAN YOU THINK

San Jose (SJO), Costa Rica’s capital, has the country’s largest airport and it’s a 2-hour drive from Puntarenas where Star Clipper sails from. Her European passengers had a choice of 6 gateways direct to Costa Rica. Flights leave from Paris, London, Frankfort, Zurich, Madrid and Amsterdam

No fewer than 11 US Cities have direct flights to San Jose. I was astonished to discover San Jose is just 4:25 from New York – far closer and quicker to get to than California.  And it’s on Central Time so jet lag presents no problems.  Canadians can fly direct from both Montreal and Toronto. 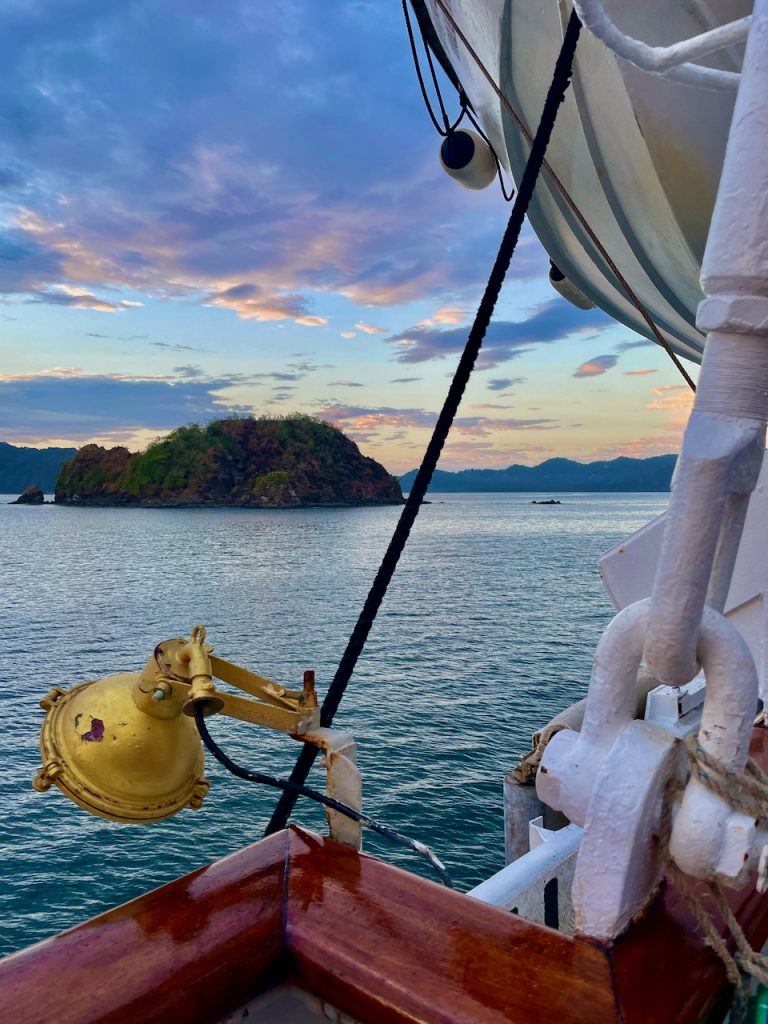 Star Clipper doesn’t fall into the all-inclusive category of cruises.  You’ll find a welcome plate of cookies and fruit and a bottle of water in your stateroom, and you won’t be ‘nickeled and dimed’ and you certainly won’t go hungry. But you will have to shell out for your drinks…in Euros. However, those drinks represent a bargain. The “Daily Drink Special”, leans heavily on Umbrella drinks, for 5 Euros. Wines are truly a bargain. I ordered bottles of great Rose again and again for 16 Euros. Shore excursions are reasonably priced. 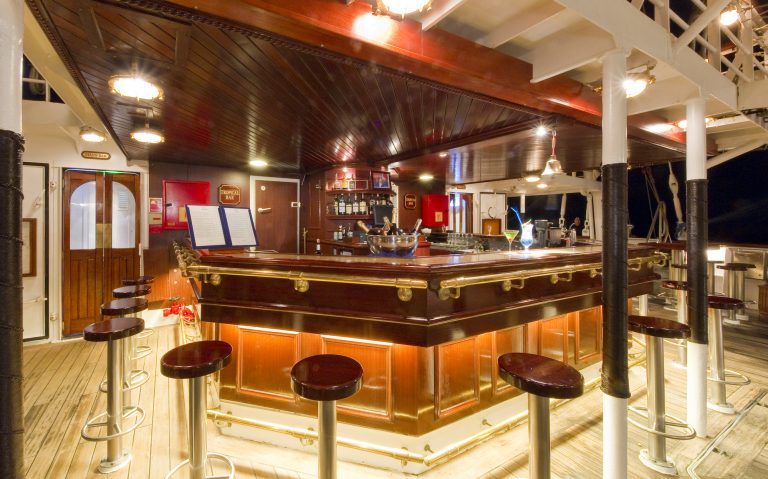 Gratuities aren’t included. The recommended amounts won’t break the bank:  Suggested is a 5 Euro tip per person per day for the waitstaff and 3 Euros per person per day for the cabin steward.  If you’re not carrying Euros, you can add these to your final bill using a US Credit card.  Star Clipper pools tips to cabin stewards and waitstaff so they encourage you to use the provided envelopes for both. For shore excursions, tour guides and drivers’ tips are at your discretion…but please do!

Then there’s the matter of the Internet.  Star Clippers sells packages for 1 hour or 4 hours of WiFi use.  The 4-hour package makes good sense. But you must log out every time you’ve checked your email or posted on Instagram. Otherwise, the meter keeps on ticking. Massages are a popular additional expense. The fee for a massage is reasonable by any standard. 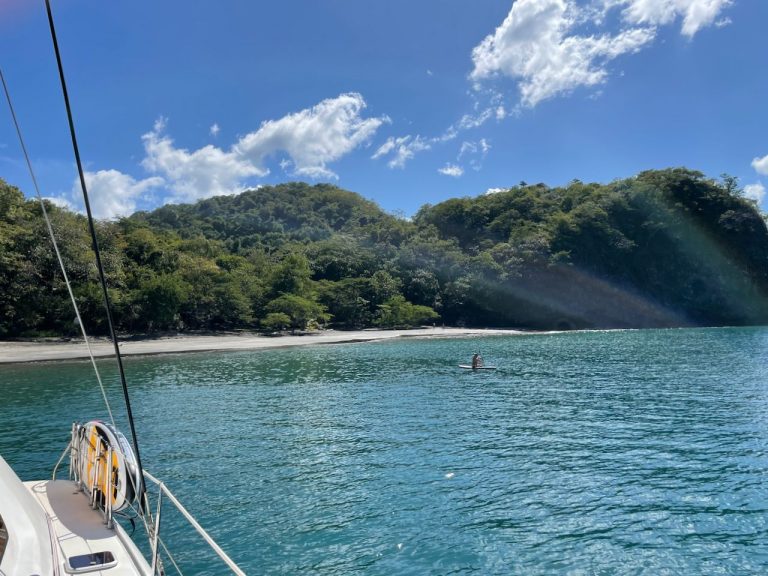 STOP THE PRESSES, WAVE SEASON BARGAINS HAVE JUST BEEN ANNOUNCED!

Guests who book by February 15, 2023 for sailings through November 2024, will receive a $230 onboard credit.  That may well cover your bar bill, massage, WiFi package or some of the irresistible clothing in the Sloop Shop.  Fares starting at just $1560 making your Star Clipper Costa Rican adventure worth every penny.

This offer isn’t just confined to Central America. Select sailings in the Mediterranean, the Greek Islands, the Riviera, Spain and the Balearic Islands through November 2024 are on offer too. Or stay closer to home on Star Clipper’s identical twin, Star Flyer as she plies the Caribbean’s least-visited islands from easy-to-reach St. Maarten.

To book directly from Star Clippers, go to www.starclippers.com 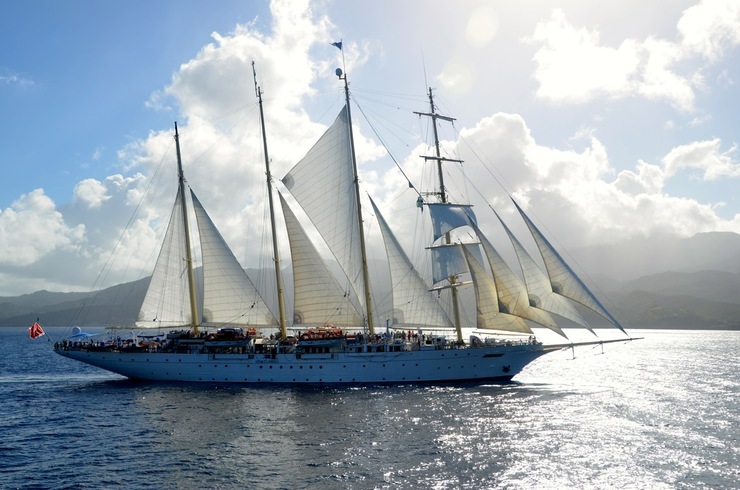